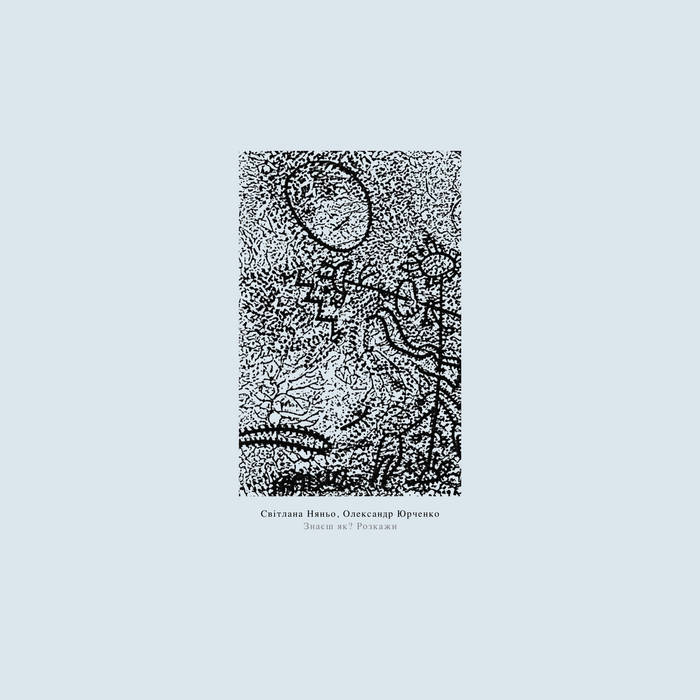 Svitlana Nianio and Oleksandr Yurchenko are musicians with a long history in the still-mysterious Kiev Underground. Nianio’s first group Cukor Bela Smert [Sugar, The White Death] were active from the late 80’s through to the early 90’s, and following an intense period of touring, collaboration, experimentation and a string of mixtapes and self-published recordings, Nianio’s first official solo album ‘Kytytsi’ was released in 1999 by Poland’s Koka Records. Oleksandr Yurchenko, a longtime collaborator and a pivotal figure in the Kiev music scene, was instrumental in creating the Novaya Scena, a loose conglomerate of artists who encouraged each other to excavate both the sounds of the West and Ukrainian tradition. ‘Znayesh Yak? Rozkazhy’ (‘Know How? Tell Me’) is the duo’s most fully realised collaboration, an enchanting, complete world in which Yurchenko’s instrumentation and playfulness with form frames Nianio’s otherworldly soprano, recalling Liz Fraser steeped in contrapuntal melody and hymnal improvisation. Originally made available on a self-released cassette in 1996 (re-issued in 2017 by Ukraine’s Delta Shock label) where the album was twinned with ‘Lisova Kolekciya’ (re-issued on LP in 2017 by Skire) this is the debut release of ‘Znayesh Yak? Rozkazhy’ outside of Ukraine.
Recorded in an abandoned park in Kiev during a fertile period for artists and musicians following the collapse of the Soviet Union, ‘Znayesh Yak? Rozkazhy’ sees Nianio and Yurchenko combine Casio keyboard, hammered dulcimer, percussion, and Nianio’s unmistakeable soprano vocalisations to create music sympathetic to the specific locations in which they chose to record. Yurchenko’s contribution is perhaps more present on this recording than anything else we have heard from the duo. His percussive dulcimer playing provides the basis on which Nianio can weave delicate keyboard lines while playfully contorting her voice, shifting from a low register reminiscent of Nico to what could be perceived as the call of a bird or an animal in distress. Whatever the intent, the effect is haunting and beautiful in equal measure.
There’s a prevailing earthiness on the recordings, found in the warm hiss of the lo-fi means of recording or the grinding, unspecified sounds that occasionally accompany the melody, like drones created on the fly by hands trying to keep warm in the ice. A prevailing mood of fragility and beauty seeps from these melodies, delicate moments of clarity spun by the two musicians. ‘Znayesh Yak? Rozkazhy’ is a dream spun in twilight, a crystalline, private world where the listener feels both alien and welcome.

Bandcamp Daily  your guide to the world of Bandcamp

Guests include Kassa Overall and Muriel Grossman, plus an LP of the week by Van Hunt.